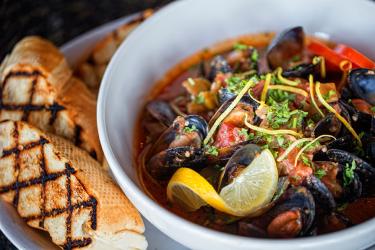 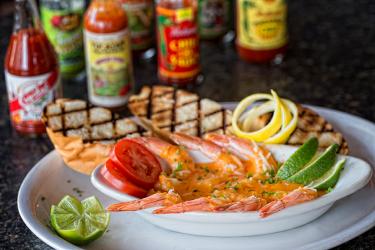 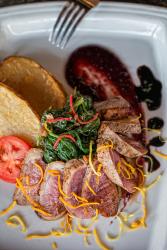 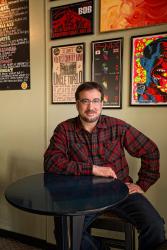 As a professional musician, Don Bailey has played music in 18 countries across the world. As a chef, he found inspiration just down the Mississippi River in New Orleans. “You have gumbo for the first time, you have andouille sausage, it’s a whole other world,” says Bailey, owner of Evangeline’s Bistro & Music House and guitarist for The Bob Band.

He flies in most of the fish and seafood served at Evangeline’s from New Orleans. “It’s all fresh, all American – all pulled from Lake Pontchartrain, the gulf or the swamps,” he says.

Evangeline’s features live music Monday through Saturday nights, during Sunday brunch and some Sunday evenings – but Bailey is almost never on stage. “We played here twice, but I didn’t want to be that guy,” he says. His band sometimes plays at other venues around town.

“I played music in New Orleans all the time. I lived there for a while. That’s when I started doing Cajun food,” he says. “I like the fact it’s somewhat complex to make. It takes a little bit of skill; I found it to be enjoyable and exciting at the same time.

When Hurricane Katrina hit in 2005, Bailey hooked up a trailer to his Jeep, went to Sam’s Club and filled the trailer with bottled water, canned chicken and canned tuna. Then he hit the road, finding his way to a church in Baton Rouge, La., that was feeding refugees. “There was a line of people two to three blocks long, for at least two to three weeks,” says Bailey, who spent 33 days in Louisiana after the storm. “We made food 24 hours a day. We slept in the tractor trailers.”

A taste of the Cooking School Menu
Tabasco Butter Shrimp: Don’t be fooled by the name. “Most people in New Orleans, for some reason, swear by Crystal hot sauce,” Bailey says, and that’s what he uses in this dish. After simmering plump shrimp in the buttery, spicy mixture, he serves them with French bread to soak up the extra sauce.

Mussels Sauvignon: Bailey makes a red-wine sauce with New Orleans cuisine’s “Holy Trinity” (onions, bell peppers and celery) along with garlic, tomatoes and lots of seasonings. Mussels soak up the complex flavors as they cook.