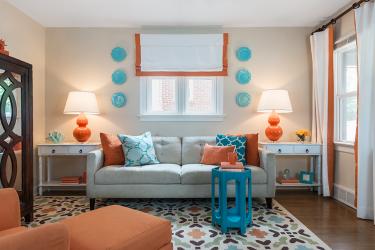 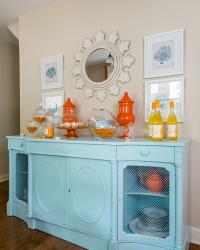 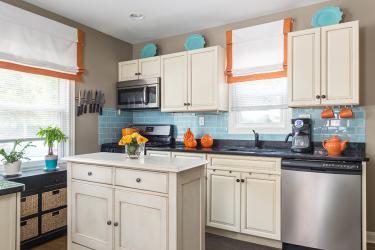 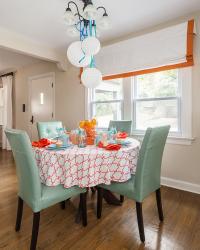 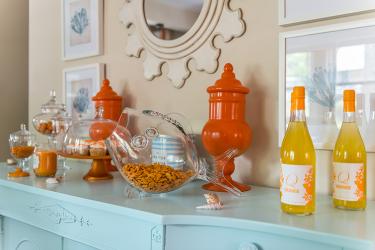 Moving from a 3,500-square-foot home in St. Louis Hills to an 888-square-foot Rock Hill bungalow was a lifestyle shock for Corina Taylor. The mother of a 17-year-old son and 13-year-old daughter, Taylor settled into the cozy, jewel-box home a year and a half or so ago and quickly realized the tiny space would need big changes to become more functional – and more inviting.

“I didn’t feel I had enough space [before],” Taylor says. “Now, the bungalow, it’s very small. It’s just a rectangle house and very narrow. … It had a more modern, stark feel to it. I wanted something more comfortable and cozy.”

When a blue-and-orange room caught her eye on Pinterest, Taylor took the image to local designer Suzanne Tullock to inspire a total redesign of the open living room/kitchen area. “I was really excited that she wanted to do that because you get to do something different, and she was willing to take a little risk with the color scheme,” Tullock says.

The trick to pulling it off was layering the colors onto a neutral palate, and Taylor’s medium-wood floors and pale-taupe walls served as the ideal backdrop. The family’s off-white sofa stayed, but Tullock replaced a second couch with an orange chair and matching footrest, freeing up floor space in the tight room. She tucked the TV inside a mirrored, dark-wood entertainment center, and in lieu of a space-eating coffee table, placed a small, six-sided table in deep azure near the sofa, providing just enough surface area for writing or resting beverages.

The most dramatic focal points lie at opposite ends of the open space – one in the living room and one in the kitchen. Bright-orange, high-end Robert Abbey lamps pop atop the off-white tables at either end of the sofa. Tullock pitted a custom white window treatment with a bold orange hem against rows of pale-blue ceramic plates mounted on the walls on either side. She further punctuated the room with accent pillows and accessories in various shades of orange and blue and tied it together with a rug that incorporated all the elemental colors in the scheme.

At the opposite end, in the kitchen, sits an ornate, wooden buffet, which Tullock bought at The Green Shag Market on Manchester  for just $50 and had professionally painted in a delicate, robin’s-egg blue. She scattered the top with a pair of sunny vases, bottles of orange drink and glass jars filled with snacks in various shades of the color (most playful is the glass fish-shaped dish stocked with Goldfish crackers, easily obtained with a quick swipe into the gaping mouth). The entire space is easily visible from the family dinner table, a glass-top round table covered in a white-and-orange patterned cloth and surrounded by pale-blue chairs.

The overall effect is what Tullock calls “a happy place” that is refined yet fun, livable and inviting; one that is neither dated nor coldly modern.

“She put all these little pieces together that you wouldn’t think would work – things you would never think to do yourself,” Taylor says. “I love it because it’s just so cozy!”