A Mind for What Matters 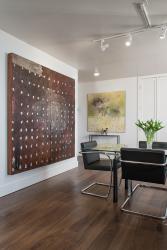 A mixed media on aluminum work by Lyn Cage gives dimensional proportion and texture to the formal dining area. 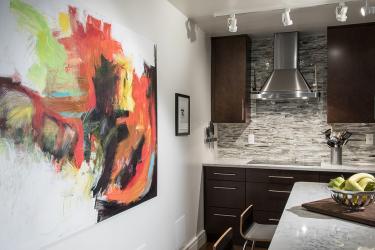 Produced by Corbusier in 1928, the glass coffee table frames the space between sofas for Goodland by Milo Baughman for Thayer Coggin, c. 1968. 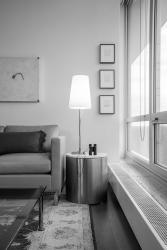 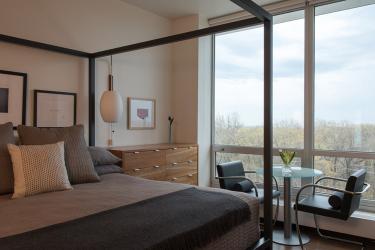 The bedroom, filled with pieces from architects around the world, overlooks the Forest Park canopy. 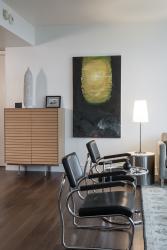 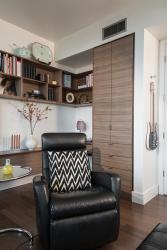 In discussing elements of mid-century modern design, one will likely encounter an amalgam of descriptions most throw around aimlessly. It’s classic, it’s organic, it’s simple, boring, strange, retro, disposable, on and on and on with a wealth of others depending on who’s doing the describing and how many cocktails are involved. Certainly it’s been all of those things, for better or for worse. But occasionally one approaches examples that are anything but aimless, which embrace a concept mid-century modern embodied at its very best: mindfulness.

“We tried to plan out every square inch of this place in a creative way,” Kent Turner says of the little more than 1,500-square-foot condo he and wife, Susan, purchased on Skinker in January 2014. Following gutting and six, or maybe eight, months of measuring, planning, tweaking, re-measuring, detailing and a bit more planning, the couple moved into the space on the eighth floor of the high rise.

“When we demolished the interior, we retained a portion of the core where the guest bath and laundry are located,” Turner says of one of the few territorial markers in the remodeled floorplan. “We retained some of the walls that define the bedroom, master bath and closet/dressing room.”

But not much more. From the dark walnut flooring by Boardwalk Floors, to the even darker custom cabinetry covering the south wall of the living room by Full Circle Design Works, to the all-new shining hardware and leading-edge lighting fixtures, the condo is a study in invention and mindful restraint for a major renovation. Keep what works, ditch what doesn’t. Evaluate and repeat. But, always keep the walls white.

Turner sits in a chromed tubular-steel chair fitted with black leather cushions on the fringes of a deep, richly colored rug. He reclines with a structured poise – ankle resting on kneecap, arms bent on the chair rests at 90 degrees, palms touching and fingers squeezing and resting, squeezing and resting. He’s the planner, the pragmatist. A proclaimed minimalist and president at Cannon Design by trade who seamlessly translates his working values into his home life, as evidenced by his least favorite part of the condo.

“You may not have noticed,” he says, sitting before a glass coffee table large enough for a coffee house roaster to sit upon, flanked by light couches as sleek as they are comfortable.

“Because no one does, ever. No one notices but you, Kent,” Susan interrupts with a laugh. She was right, however. I hadn’t noticed. Turner has an acute sore spot for the rounded corners of the vast marble countertop in the bright and spacious kitchen designed for a dinner party social phenomenon: everyone ends up standing in the kitchen.

“I think about them often. A lot,” he says, turning to his wife who sits smiling, stroking their Welsh terrier, Brady. Susan brings a familiar ease to the space, like the reflection of the beautiful day shining back into the sitting area from a textured Italian metal cabinet holding family photographs and keepsakes.

“It’s just now starting to feel like home,” she says. “My Christmas cactus is just blooming and my orchids are coming back.” And her blooms indoors aren’t the only signs of spring witnessed in the condo. Eighty feet below is the western edge of Forest Park, even more a sight to behold when it develops an organic skyline showcasing the spectacular, if brief, seasonal changeover in full view. The Turner’s entire eastern wall, steel and glass, frames the only uncontrollable aspect of the home, which – with no effort at all – highlights the natural beauty, lines and shapes of the space. Fundamental elements of modernism.

This meshing of effortless and uncontrolled, pared down and planned is where the condo finds its roots in the design movement. Built in 1962, the building was designed to allow residents gracious living with unprecedented high-rise access to the natural beauty of the park. Though a number of high rises have been constructed throughout metropolitan St. Louis, the Skinker building remains one of the best, if not one of the only, mid-century modern structures in the city. Arguable nothing built in the last few decades rival the fundamental elegance and design integrity of this building. When it came to moving from the sprawling and full Central West End home the couple shared on Pershing for 16 years, the high rise by the park was all that would do. “I miss hearing my footsteps in the empty hallways,” says Turner, “but that’s about it.”

For the Turners, it took considerable downsizing to upgrade. Furniture was donated to children and family members, trinkets and heirlooms were moved to the lake house and there was a culling of black coats. “He said I had too many,” Susan says, looking into the generous walk-in closet situated between the master – and only – bedroom and the master bath. The closet included, storage space was paid a particular level of attention in the redesign. "Particular" meaning objects like game boards, craft supplies, shoes and yes, coats, were noted and meticulously fitted into their respective spaces.

They’re an exercise in mindful restraint, the couple and condo. And Susan says she chooses her “battles.”  “If I really want something,” she says, “I put my foot down and ask for it. Otherwise, it’s reassuring to know Kent is planning for the rest. It’s one less thing to worry about.”

“Susan was very patient with me, as she always is,” Turner explains in reference to choosing 801 S. Skinker to be home. “She was freaked out, wondering if this could possibly work.” But is has, and her nook in the corner housing her desk, artwork from grandchildren and a prime position in the cozy corner of the casual sitting area, is symbiosis in style; complete with an abundance of abstract color field canvases and art pieces, some by artists known to the world, others who are the world to the homeowners.

“We have a lot of art, art is very important to us… we wanted to entertain and open it up. And to have storage built in,” Turner says as his eyes sweep the entirety of the condo, an act that takes all of eight seconds to accomplish in full.  “Our inspiration wasn’t much more complex than that.”