Cass Bonsai Gardens' Ciskowski brothers ply wood in the business where they got their roots. 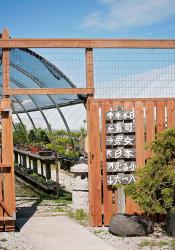 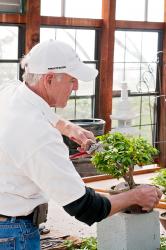 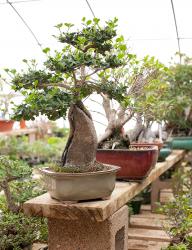 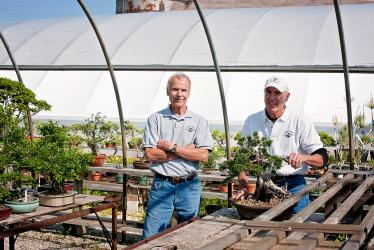 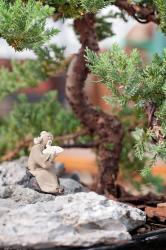 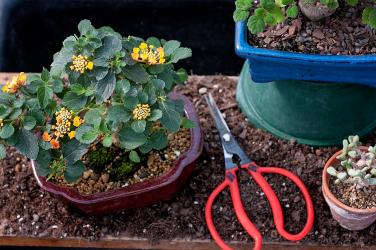 Brothers Milt and Brian Ciskowskis' trajectory toward their current calling has had as many twists and turns as one of their many manipulated trees. The two started their careers on their grandfather’s farm, where they raised cattle and helped in the florist shop he founded on Cass Avenue in 1910. They eventually moved the shop and greenhouse to North St. Louis, closing up and re-emerging as Cass Bonsai Gardens at 6145 Quercus Grove Road in rural Edwardsville, IL, in 1998.

The bonsai biz indulges the brothers’ lifelong green thumb and a bonsai passion that, for Brian, 60, started about 30 years ago with a series of unfortunate junipers.

“Most people’s first [bonsai] tree is the little garden juniper,” says Brian. “That’s usually the first one they kill, and most people give up after the first one. I killed my first three.” Inexpensive, hardy and green year-round, they’re also good bonsai starters because they can take shape so quickly.

“Those are really instantly gratifying because they already have that sort of [bonsai] character,” says Milt. “A little pruning and, within an hour, you can have it looking like something.” “You don’t even need a lot of fancy equipment,” Brian adds. “If you’ve got scissors and wire around the house, you can get something going.”

But, while juniper may be the novice’s bonsai of choice, the Ciskowskis work with a large variety – ficus, pines, maples, fruit trees, tropical – both native to the region, and imported from all over the country and around the world. Everything’s ripe for experimentation if pruning and repotting are properly timed. “One guy I know has a poison ivy tree that he’s been working on for years,” says Brian. “He’s not allergic to it, [but] no one else will touch it.”

The brothers pot their specimens in a soilless mix of fir bark and a fired clay product that prevents overwatering. While Milt, 63, manages the growing, it’s Brian who manipulates it. Careful pruning of the branches steers the shape, while trimming large roots encourages the growth of many smaller roots that keep the plant healthy and limit its size naturally. Then comes the wiring that forces growth to create the desired look.

“It’s like putting on braces,” says Brian. “You put the wire on really tight and let it bend. You just have to be careful – don’t overdo it. You can always go back and tighten it bit more if it’s too loose. When the wire starts cutting into the bark after a few months, we take it off slowly. You don’t want it to cut into the bark, but you want it to scar a little. The calluses help it keep its shape.”

Prices for specimens sold at Cass Bonsai Gardens can range wildly, based on the materials and time put into their care. A small tree for the desktop can be had for $15 to $25; mediums, $75 to $100. Then there are the large, decades-old, imported trees Brian has worked since picking up the art 30 years ago, that can run into the thousands.

For those who’d like to try their hand at the art, Cass Bonsai Gardens sells starter materials that run about $25. And, at 6:30 p.m. on the second Tuesday of each month, you can join the Ciskowskis with the St. Louis Bonsai Society at the Missouri Botanical Gardens to pick up tips and tricks.