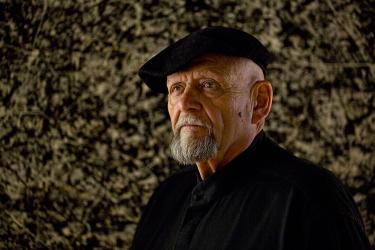 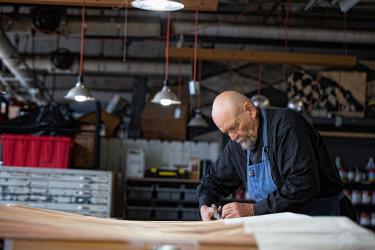 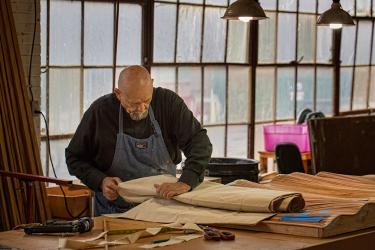 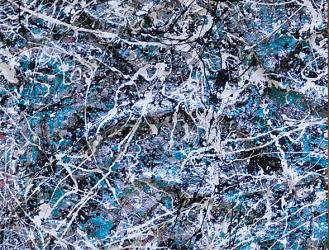 Ty de LaVenta’s story begins with the August 1949 issue of LIFE magazine, which profiled the life and works of Jackson Pollock. Nine-year-old de LaVenta was so enthralled with Pollock’s paintings that he was determined to become an artist himself. Unfortunately artist wasn’t a respected or viable career choice in his small farming community, so he channeled his creative energy into a construction business. De LaVenta’s dream remained unfulfilled until five decades later, when a spiritual experience at the Mayan ruins of Tulum compelled him to create his first sculpture. That sculpture was selected for a juried art exhibition by the St. Louis Artists’ Guild. Encouraged by the jury’s validation and his supportive wife, de LaVenta finally realized his true calling, first as a sculptor and then, at the age of 70, as an abstract painter.

De LaVenta’s paintings are energetic and expansive. He works with acrylic on canvas, adding materials that he makes himself, like powdered nickel and bronze. Using the knowledge gained from his years in construction, he’s currently developing a new paint which he promises will “capture and move the light.”

The process De LaVenta employs before he picks up a brush is even more intriguing than the materials. de LaVenta is a devoted practitioner of Vipassana Meditation, and meditates for up to two hours before he paints. “If I don’t get in that space, then I don’t paint. And I’m careful not to paint if there’s anything that upsets me. I don’t want that [negative emotion] in the studio or in the canvas,” he says. Once his mind is clear, de LaVenta paints with abandon. “I’m not aware of time when I’m in my studio. I just paint intuitively,” he explains.

A conversation with de LaVenta about his own paintings doubles as a lesson in art history. He references master painters with knowledge and admiration usually reserved for one’s closest friends. He draws inspiration from Yves Klein, Mark Rothko and Diego Rivera (a.k.a. Mr. Frida Kahlo), among others. “Rivera is so bold with his colors.  [His work] tells me to be bold, too,” de LaVenta says. Jackson Pollock, of course, is still ever present in de LaVenta’s consciousness. “Pollock brings emotions to the canvas. When you’re in front of his work, you experience him. You experience his emotion,” de LaVenta says.

That same emotional connection is what de LaVenta hopes to evoke with his own work. John Camie of Creve Coeur purchased an original painting from de LaVenta, and responds to the painting on an visceral level, “My painting...is a stunning expression of emotional experience. It’s not passive. I encounter it every day as a new experience,” Camie says.

For more information on commissioning an original piece, contact Ty at [email protected].