A sleek and elegant lower level is designed with adults and kids in mind. 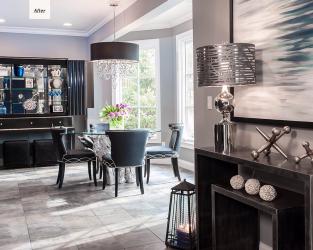 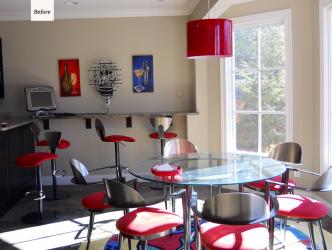 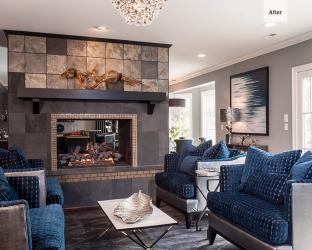 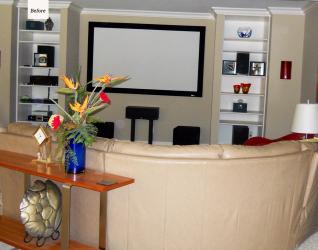 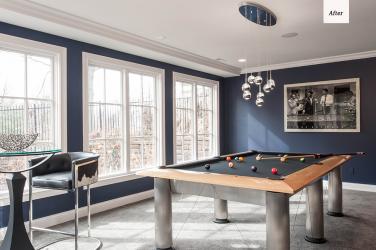 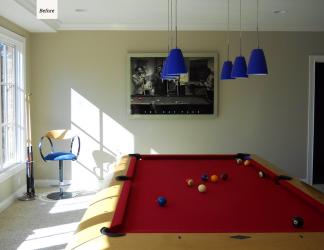 It started the same way many renovation projects start… with a simple desire to switch up some accessories and freshen up the lower level. But this renovation story quickly took a different turn. “We started dreaming, and once we started dreaming it turned into a whole remodel,” says designer CJ Knapp, who recently formed her own interior design firm Yours By Design.

Knapp, in conjunction with Savvy Surrounding Style, worked with the homeowner to transform their dated lower level into a place for mom to enjoy with her teenage boys in mind. “The lower level originally was designed to withstand big groups of teenage boys,” the homeowner says. “It was boring and bland but indestructible. We wanted to make it a space that adults could hang out with a contemporary feel.”

The catalyst that set the direction of the design in motion was a deep Prussian blue-and-silver fabric the homeowner fell in love with. Paired with shades of gray, from flint to charcoal, and contrasted with silver accents, the color scheme is carried across the three spaces.

In the two TV areas, carpet was replaced with walnut distressed wood. Different, but complementary, area rugs distinguish the spaces. The fireplace in the seating area is covered with slate and trimmed with amber glass tiles. The mantel was enlarged and topped with a custom glass sculpture from Savvy Surrounding Style. “The changes to the fireplace really make the gold and slate pop,” Knapp says.

For seating, Knapp knew she needed chairs that were not only stylish and comfortable but also covered in fabrics that teenagers couldn’t hurt. The four custom one-and-a-half chairs are upholstered in a rich blue fabric with silver leather on the outside for durability. Initially, the designer and homeowner were challenged by how to use the sitting area. “We had a hard time figuring out what to do with that space,” the homeowner says. “I am very pleased with the arrangement CJ came up with. It looks great, and we use it all the time.”

Sleek, oversized seating with contemporary lines makes the adjacent TV area chic and inviting. A silver leather ottoman is on wheels making it easy to move to create more seating. The bookcases flanking the TV are original to the house and accessories were added to enhance what the homeowner already had. The media cabinet under the TV establishes a focal point in the space. Cast silver accent tree branches form the legs of the storage unit and tie in the silver found throughout.

In the pool-table area, a commercial-grade carpet was selected to withstand traffic flowing into the lower level from the pool. A bistro table gives height. Knapp suggested the homeowner change the felt on the existing pool table to transform the look. “It is an easy way to give the area a new look,” she explains.

Tying the entire space together are contemporary, bubble light fixtures and the repeated use of swirls and circles. Besides the sleek and elegant look of the new space, the best part about the lower-level remodel is that all the pieces work together and could be mixed in various ways if the homeowner ever moved. “I don’t like cookie-cutter rooms,” Knapps says. “I don’t think colors should match perfectly.” With shades of blue and gray, Knapp proves you can do a lot with paint, shapes and texture.