A Clayton high-rise gets a hearth-y helping of French charm. 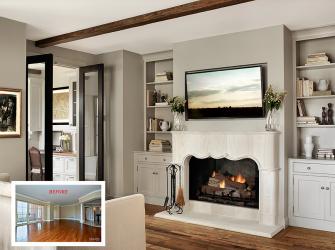 Short on functionality and lacking warmth, Susie Knopf’s Clayton high-rise was overdue for a reboot in late 2014. The 2,500-square-foot space now pops with charm from a rustic floor-to-ceiling renovation that includes two fireplaces.

“The unit was very dated,” says Susie, “and, being an interior designer, I wanted a different style and needed to have more storage and open up the space.”

So she teamed with Chris Berry, design director at brooksBerry Kitchens & Baths, to redesign the home with a French country feel. “She described the style that she wanted for this entire new home as a rustic Parisian pied-à-terre (small, secondary home),” Chris says. “I pictured Josephine in exile.”

Having worked with Chris on a number of projects over the last 20 years, including her past homes, Susie knew she could trust Chris’ strong architectural skills to bring her vision to life. That vision included a new natural-gas fireplace in the great room, where family and friends can bask in the glow. "I like having the warmth, literally, of a fireplace and the feeling of coziness it provides. We also added an electric fireplace in the master bedroom.”

“It had to look old and real to anchor the large room and big enough to have actually heated it,” Chris adds. “The biggest obstacle was dealing with its weight and meeting the code requirements to install it in a Clayton high-rise. We spent hours working through minute details with the gas log and firebox manufacturer and the cast stone supplier to pull it all together.” After the essential components were gathered, it fell to Tony Russo of Russo Stone and Tile Design to maneuver and anchor sections of manufactured stone that weighed several hundred pounds each. Each section had to be mortared, joined with the next section and dried before the next section could be stacked atop it.

Built with the top of the mantel near eye level, the stately fireplace mimics the European style and texture. “Although made of a man-made cast limestone with high-efficiency vent-free gas logs, it looks and feels authentic, like a real old wood-burning fireplace. … Everyone touches it to see if its real and it fools everyone! That’s the best compliment,” Chris says.

The construction process was lengthy but worth the wait. When Susie’s children and grandchildren can’t join her around the hearth, she’s content to kick back with a glass of wine and a juicy read – or an evening of entertainment in front of the television that’s mounted just above the crackling, fuss-free fire.