Modern Southern fare shines at Juniper in the CWE. 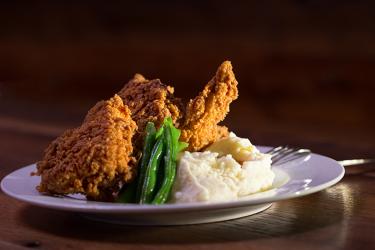 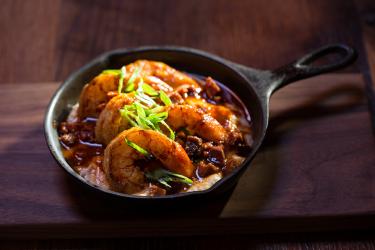 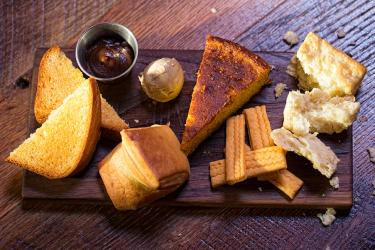 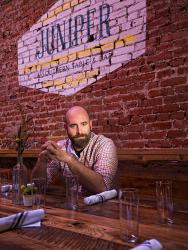 John Perkins’ path to becoming a chef and restaurateur was as winding as it was unconventional. “I was late to the game,” taking his first restaurant job at age 30, says Perkins, chef-owner of Juniper in the Central West End. He also considered a number of other careers, including photography, writing and graphic design, and he earned a master’s degree in divinity.

That first restaurant job was Harvest, the fine-dining restaurant owned by Steve Gontram. “I was there maybe five days,” Perkins says, before he was fired over a misunderstanding about a day off. “I didn’t work in another restaurant for five years after that.”

He later spent short stints working for Jim Fiala at Acero and Gerard Craft at Niche.“I was just a sponge. I asked a lot of questions,” Perkins says.

He put his experience to the test in 2008, when he began staging monthly underground dinners. Guests requested reservations online without knowing the menu or the venue until the day of the event. Originally, even Perkins’ name was a mystery – he called himself the Clandestine Chef.

As his success grew, Perkins unmasked himself and opened an event space. In 2013, he decided to use the space for a series of short-term restaurants, each with a distinct name and menu. Barely six months later, he opened Juniper, featuring the Southern cuisine that was a hit at his first temporary restaurant, called “A Good Man is Hard to Find” in a nod to the short story by Flannery O’Connor.

He describes the fare at Juniper as modern Southern food. “Lots is recognizable,” he says, “and lots comes out of left field.”

The latter category includes his chicken and dumplings, roulade of chicken served with gnocchi, sweet potato puree and smoked chicken consommé. The former encompasses both types of biscuits included in the bread basket – feather-light angel biscuits, made with yeast and allowed to rise twice, and buttermilk biscuits, heartier but still tender and delicious.

A taste of the cooking school menu:
Fried Chicken. Perkins’ fried chicken has a Thai twist – he brines the bird for two days in a savory blend that includes lemongrass, ginger, citrus zest and palm sugar. “The crust is light, and the best word I could use to describe it is crackly,” he says. “From the beginning, it was the most popular dish we served. People love it.” While fried chicken is always on the menu, it’s all-you-can eat and family style on Mondays, with seasonal sides like macaroni and cheese and tomato-cucumber salad.

Bread Basket. Saving room for the rest of your dinner is no easy task when you order Juniper’s bread basket, which includes cheese sticks, angel biscuits, cornbread, buttermilk biscuits and Sally Lunn bread. Perkins will demonstrate one or two recipes.

Shrimp and Grits. Shrimp stock, house-made bacon and andouille sausage and classic Cajun flavors blend in the sauce that is ladled along with shrimp over yellow grits. “It’s a little spicy; it’s really savory,” Perkins says. “That’s one of those dishes that will probably never go off the menu.