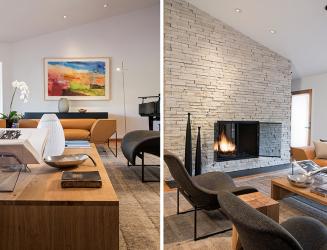 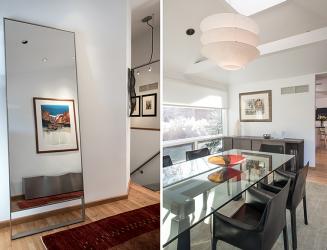 A background in horticulture has given Steve Schultz both the means and perspective to turn his Town and Country residence into a private oasis. With a recording studio, hair salon and fitness studio all built right into a contemporary design, it’s a home that’s simultaneously indulgent and simple.

Schultz spent a career in the lawn and garden manufacturing business, heading up Schultz Co., the business his father founded, before selling the company in 2002 and retiring from it several years later. (Readers may be familiar with products like Repel, Hot Shot, Cutter and Black Flag, which fall under UI’s Spectrum Brands division.) Retired since 2006, Schultz’s maintains a deep appreciation for nature and a desire to make his one-acre lot a central element of the home’s contemporary style.  “I like the simplicity of the house,” says Schultz, noting the picture windows that afford him a grand view of the garden. “It’s a simple environment that brings the outside in.”

Jim Graeler of Chesterfield Valley Nursery worked with him to create landscaping that is excavated low for privacy and offers a green vista year-round, while architect Phil Durham designed an understated interior that showcases Schultz’s view of the yard, and his collection of fine art and Italian and custom furniture.

Black, tan, shades of gray and other neutrals are incorporated into a color palette that is dominated by white walls throughout, and the clean geometry of the architecture is open and uncluttered by a single crown molding or archway. “It makes the walls nonexistent," Schultz says. "When I’m looking out the picture windows, there’s no color on the walls fighting the view. When I’m enjoying artwork, there’s nothing competing with that.”

But hard lines and angles don’t mean the space is cold—far from it. A natural stone fireplace warms the living room literally and figuratively for guests who gather in the glow. Rich wood and leather are prominent in the furnishings and décor, and the judicious use of art lends a timelessness to every room.

Steve’s son works as a music producer, so music also played a central role in the redesign. An acoustically perfect recording studio and sound booth are ready for in-house recording, while ceiling-mounted Sonos speakers can be independently controlled in any of the nine separate zones throughout the house and patio. One of Schultz’s most prized possessions, a Yamaha Disklavier baby grand, is also a focal point. It seems the sounds of silence aren’t a welcome option anywhere in the home.