Cruising the Crus with Georges Duboeuf 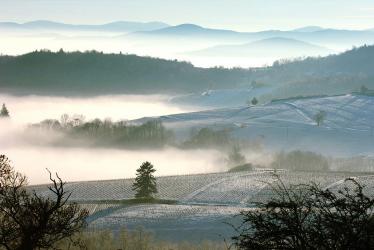 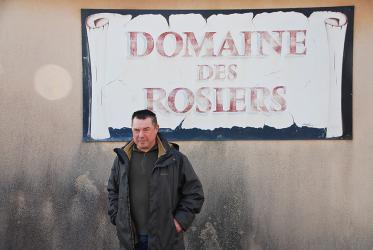 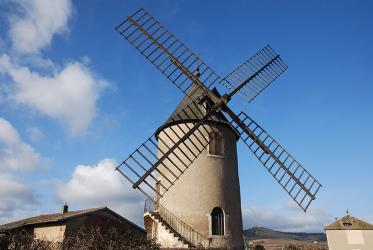 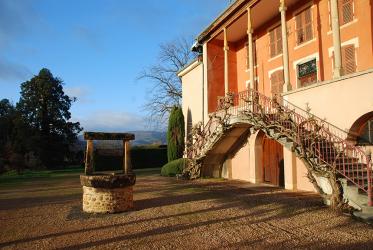 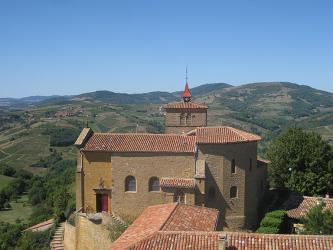 One could not have a more knowledgeable guide to the Ten Crus, the distinct growing areas of southern Burgundy’s Beaujolais region, than the native son of a farmer and descendant of four centuries of wine producers – Georges Duboeuf.

Georges was very young when his uncle and brother passed down both their passion for wine and their secrets of production. At just 18 years old, he preferred to take care of the family business with his brother, rather than pursuing another career.   He was often seen with the family’s wines strapped to his bicycle, meeting top restauranteurs in Lyon, which, at that time, was gaining a reputation as one of France’s gastronomic capitals.

Grape growing and winemaking in this region dates back to Roman times, followed by the Benedictine monks in the middle ages. The Dukes of Beaujeu, from which the region gets its name, made the wines fashionable. When the railroads were built in the 19th century, Beaujolais wine’s popularity spread as far north as Paris, but the town of Lyon remained the main market for Beaujolais wine. The food from the region paired beautifully with these wines made from the red Gamay grape.

Bordered by Burgundy to the north, the Saone River to the east, Lyon to the south and the Monts de Beaujolais in the west, the region is just 34 miles long and approximately eight miles wide. It is very possible that Georges Duboeuf knows nearly every inch of it. From his early days of bringing his wines to market, he became very friendly with other growers and small-production winemakers, and it wasn’t long before he started selling their wines, as well, in the French tradition of “negociant eleveur” (a fine wine broker).

There was Jean-Ernest Descombes, an immensely engaging grower and winemaker who worked with Georges nearly from the beginning, making elegant, sumptuous wines from the Morgon Cru that are redolent in aromas of black currant, plum, violets and old-fashioned roses.  Jean-Ernest has passed, but his daughter Nicole, who Georges has known from her birth, honors her father’s legacy by continuing to make full-bodied wines of which he would be immensely proud – and still represented by Georges and his family, including son Franck, who handles the day-to-day operations of the winery and company.

Fleurie’s Clos des Quatre Vents, Domaine du Paradis Saint-Amour, Chateau des Capitans from the Julienas Cru —all have similar, long-term collegial business ties to Les Vins Georges Duboeuf. Like Nicole Descombes, many border on the familial. Their passion for bringing the best of Beaujolais to the world has made Georges and his family ambassadors for and within the region, with the launch in 1993 of “Le Hameau Debouef.” Run by Franck’s wife Anne, it is the world’s first “theme park” dedicated to vines and wines, stretching out over Duboeuf-owned acreage in the heart of the Beaujolais, in the small town of Romaneche-Thorins

A major tourist attraction, “Le Hameau” as the family calls it, includes a highly artistic and informational museum on the history of wine and how it’s made, housing one of the world’s largest wooden wine presses and a collection of French wine posters dating back to the late 1800s. A giant marionette theater sits next to a 21st century 3D simulation ride that follows cartoon bumblebees on their rounds through the vineyards.  “Au Jardin En Beaujolais” is a lush flower garden that rivals many of the top “planned gardens” in Europe. A café serves traditional regional dishes that have become synonymous with French cuisine in the United States.

If you can’t come to play and learn with the Duboeufs in Beaujolais, you can cruise through as many of the Ten Crus as you want in St. Louis by holding a “Beaujolais-Maconnais” dinner with family and friends. The Maconnais region of Southern Burgundy lies to the west of the Saone River, right next door to Beaujolais, and is known for its white wines made from the Chardonnay grape, particularly Pouilly-Fuisse and Saint-Veran. Georges Duboeuf was born and raised in this area, so it is no surprise that his longest collaborations with growers and winemakers are from the Maconnais.

The Pouilly-Fuisse Emile Beranger comes from a family with roots in the area’s terroir for more than 200 years. Emile (of the label) has been tending the land since the early 1960s, along with his wife and now, son and daughter-in-law. This wine, which has been under Les Vins de Georges Duboeuf close to 50 years, is a great starting point for your gastronomic tour, paired with something as simple as a lobster salad or the more complex Coquille St. Jacques (scallops in cream sauce).

All Beaujolais red wines are made from the grape Gamay, which is a bit lighter in body than its northern neighbor Pinot Noir and bursting with fruit flavors. One of France’s legendary chefs, Lyon native Paul Bocuse, highly recommends both adding such Beaujolais red wines as Fleurie or Brouilly to the popular French chicken stew, Coq A Vin, and also serving either wine alongside.

French onion soup also is well served by a Beaujolais red next to it on the table. The heartier reds like Morgon or Moulin-A-Vent, are excellent companions to beef braised in Beaujolais or beef bourguignon, both of which benefit from a bit of the wine among the dish’s ingredients.

At the end of a tour of your gastronomic tour of the Ten Crus of Beaujolais, Georges Duboeuf might tell you “these growers and winemakers have been producing some of the finest, if sometimes underrated, wines in France.” As you’ve just taken your own delicious Tour de Beaujolais, you already know.