Taking a chance in her landscape design, a Wildwood master gardener has hit the jackpot. 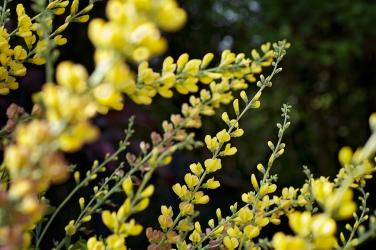 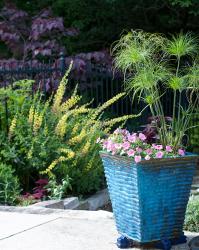 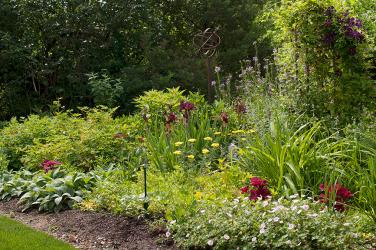 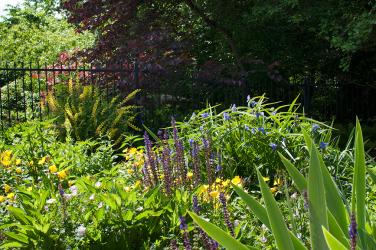 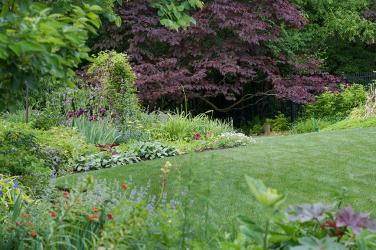 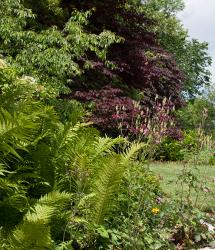 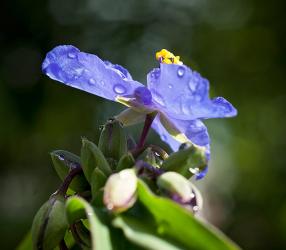 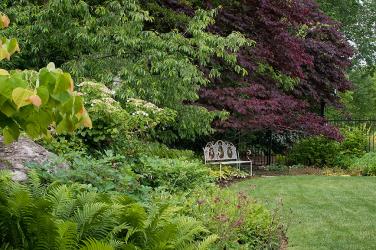 Leigh Walker confesses to being a gambler. She’s been hooked for over 25 years. Her addiction began in 1990, three years after she and her husband built their West County home. It started with just a few free plants provided by neighbors. The odds of those plants surviving were no safe bet. To illustrate the length of the odds, Leigh spins the tale of two broken pick axes, destroyed simply by trying to get a mailbox post planted in the rocky, clay soil. If the obstacles where that forbidding to a tough metal spike with some manpower behind it, what chance did tender plant roots have?

Leigh quickly realized that if she wanted to have any kind of garden, she needed to give the plants a chance by doing something to improve the soil. “You can never put enough organic matter in the soil,” she says firmly. “If you have bad soil, no matter how much you spend on plants, nothing will survive.”

Rather than amending her existing rocky clay, Leigh decided to bypass it by creating raised beds. An easy choice might have been to use retaining walls to encase the new planting areas, but Leigh wanted a more natural look.  She opted to gradually mound up the soil from the yard base by creating garden mounds composed of half top soil and half compost.

To give the garden a more natural look and “create height and definition,” Leigh needed something to back the mounds. This time the gardening odds were in her favor. Just up the street, builders were blasting out the rocky ground for another house. Those blasts created large boulders. “They knew I wanted them,” she recalls, “so they just bulldozed them down the street” rather than hauling them away.

Poor soil wasn’t the only issue surrounding Leigh’s garden gamble. Her half-acre yard backed up to a wooded area and a dry creek bed frequented by deer. Her burgeoning garden was ripe for the snacking. She quickly learned, “I have to work with the deer. It is their land too, and they are not going away. They have no natural predators.”

She first installed netting from the dry creek bed to her garden to make the deer’s climb more difficult. But the plucky deer did not discourage easily. She took a shot at “probably every foliate (foliage spray) product made” plus deer fencing. And still they came. Two years ago the deer-discouragement odds made a dramatic flip in Leigh’s direction. She set out a Wireless Deer Fence, a patented deer training system developed by a veterinarian. While still using fencing, the addition of the wireless system made her feel as though she had hit the jackpot.

Wireless Deer Fence consists of a series of battery-operated posts with a scent piece that emits a sweet odor attractive to deer. When they approach the posts, the deer receive an electric shock. After a few shocks, the deer discern that this particular buffet is not to their liking. (Late last summer, Leigh had an issue with water getting into some of the battery compartments, but the company stood behind the product and replaced the faulty posts. She feels they have now corrected the problem.)

Although the scent pieces need to be replaced once a month, the posts can be left in the garden throughout the year. Leigh estimates it only takes about 10 minutes to change out all the scent pieces. The posts are sold in three-post packages with one years’ worth of scent pieces for approximately $60.

In the first gardening season after installing the Wireless Deer Fence, Leigh celebrated with “the best flowers I had ever had.” Last year her luck continued. “I don’t mind having the deer around,” she says with a laugh, “just not in my yard.”

In the years she has been gardening, Leigh, now a certified Master Gardener, has learned by trial and error and currently reigns over a yard composed of graceful beds filled with colorful shrubs, 80 percent perennials and 20 percent primarily self-seeding annuals, such as poppies, nigella and salvia. She loves the color provided both by flowers and plants with bright-colored foliage. “I have an obsession with coleus,” she says. The rich purple foliage of “Forest Pansy” red bud is another favorite, which she uses in numerous spots throughout her landscape. A second obsession, she admits to, are plants with chartreuse foliage. Another garden favorite is the Oriental Kousa dogwood, which blooms later than our native dogwoods and bridges the gap between the spring and summer flowering plants.

Throughout her garden, Leigh employs plant-filled containers to fill in bare spots. “I love bleeding heart,” she says, “but when the foliage goes away in the heat of the summer, it leaves a hole in the garden.” She also loves to pick up both whimsical and beautiful artifacts to add interest to the plant material. Occasionally, she worries there might be one-too-many objects in the landscape. “I’ve told friends to stop me if it looks like I am hoarding,” she says with a laugh.

A nurse by trade and an admitted workaholic, Leigh got into gardening as a tension reliever. “I worked long, stressful days,” she says. “My husband told me I had to find something else to do or I was going to an early grave.” Both of her grandmothers had been gardeners, so she decided to give it a try and it worked. “Nothing relieves my stress like gardening,” she says “My husband says he always knows where I am and he doesn’t have to go looking for me on the boats (casinos). I do my gambling in the yard.”

“Gardening is lifelong learning,” she adds, “because the learning never stops.  You keep planting and planning for the next year and always looking forward. It has also taught me that some things are beyond my control. I am a ‘Type A’ personality, but I have learned to adapt.”