It's all Greek and Italian to the Brothers Scarato. 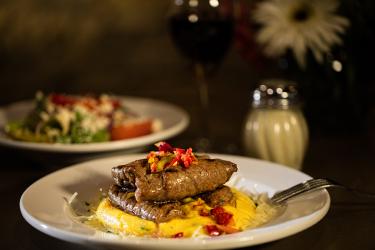 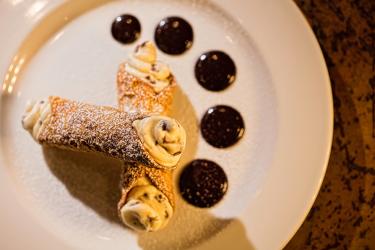 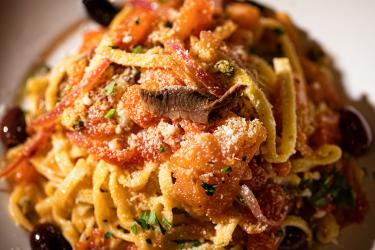 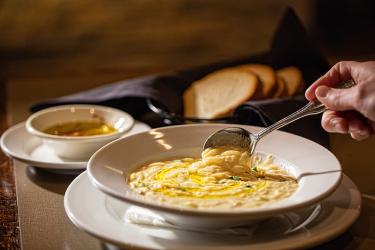 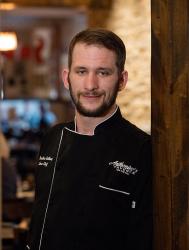 Anthonino’s Taverna on Macklind Avenue serves up a nod to a multinational, cuisine-centric upbringing and homage to the shared food experience.

Since opening their first Greek-Italian fusion restaurant on The Hill in 2002, brothers and owners Anthony and Rosario Scarato have perfected their own twist on this fare, offering dishes peppered with recipes from both countries, and marrying sentimental favorites into their own thing. Greek on their mother’s side and Italian on their father’s, they meld Mediterranean flavors onto one eclectic menu that still honors the classics.

Customers flock to the Scaratos’ version of toasted rav, made famous after celeb chef Guy Fieri raved about them on Food Network’s “Diners, Drive-ins and Dives.” Also popular is the hand-tossed pizza, which features a chewy-crispy, bready crust favored by Mrs. Scarato, and her homey Greek avgolemono soup. “That is one of my favorite soups of all time. It’s creamy without cream, and very satisfying,” Anthony says.

In a mid-continent state where the weather is often as different from the Med as a region can get, opportunism is a restaurateur’s best friend. The Scarato brothers’ sourcing is local and seasonal, but also culturally faithful. Authentic artisan cured meats come from St. Louis-based Volpi Foods, and other things like cheeses are imported from Italy. What ingredient can be made from scratch – dressings, sauces, pastas and breads, for example – are regularly produced in-house or by nearby fresh food purveyors.  “We always want to have that depth in flavor,” says Anthony. “We try to keep a close approximation to the food of our heritage as best we can in the middle of a different country

The Cooking School Menu
Greek Avgolemono Soup. This traditional Greek chicken soup gets its zing from fresh lemon juice and a bit of heft from the incorporation of beaten egg yolks. “It ends up thick and creamy,” says Scarato, “It’s not difficult, but there’s important stuff you’ve got to do so you don’t scramble the eggs.” Temper, temper…