Who knew the two could be such a winning combination. 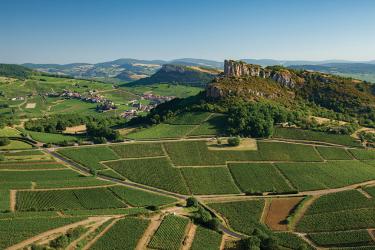 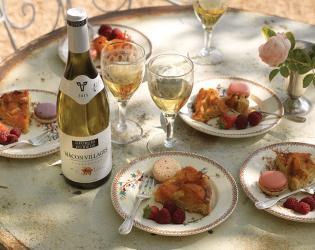 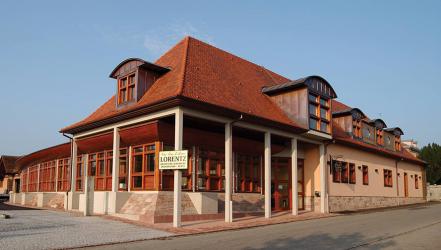 The unique French toast offerings that are the hallmark of breakfasts at the historic Inns at St. Albans pose a very interesting challenge to wine-lovers. Most of the time, the simple egg-dipped bread fried in butter is the bastion of breakfast or brunch, meals where the drink of choice is more often a cocktail like a bloody mary or mimosa, or maybe a café au lait.

Certainly the traditional French toast, or pain perdu as it is known in France and England, does not call to mind many wine partnerships. But, when it’s stuffed with caramelized leeks and topped with beef short ribs in a red-wine reduction, it breaks the barrier and enters the realm of wine-pairing nirvana.

Going all French for these dishes, the aforementioned first recipe would work with a plethora of light- to medium-bodied red wines from grapes such as Pinot Noir. However, in honor of this unusual food-wine pairing, we are traveling to France’s Cotes du Rhone, where the predominant grape is Grenache, with Syrah also growing there. It is situated in the country’s southeast, with the southernmost part right next to Provence.

There are quite a few Cotes du Rhone wines available in the United States, but the best match would be the value-priced Cachette Cotes du Rhone. It is a blend of Grenache and Syrah, with some Cinsault and Carignan adding a spicy fruitiness that plays off the richness of the short ribs and the mild onion-like flavor of the leeks.

When French toast laced with chives is served with buttermilk-battered, pan-fried catfish, we’re pouring a white wine with body in our glass. The Maconnais region of Burgundy, lying just between Northern (the Cote d’Or) and Southern Burgundy (also known as Beaujolais) is a hotbed of Chardonnay vines. Almost all of the grapes grown here are Chardonnay. French Chardonnay wines are usually produced without oak, so the wines have a fresh bouquet and flavor and show this white grape in its purest state.

One of the most famous names in the region is Georges Duboeuf, who was born in the Maconnais, though he became a worldwide celebrity with his Beaujolais Nouveau. Les Vins Georges Duboeuf make some of the region’s finest wines…the Macon-Villages in his signature flower label, with its acacia flower, citrus and lemon peel flavors, are a natural with fried fish and will pick up the chives in the French toast in such a way that the hint of anise on the finish becomes a bit more pronounced – and that much more delicious.

Like Belgian waffles, French toast can be a terrific base for sweet dessert toppings. Cajun French toast is a particularly spicy bottom layer for caramelized fuji apples and a drizzle of caramel sauce. Spicy…sweet…bubbly time!

But, instead of reaching for the expected Champagne, we’re going to another eastern wine region of France, for an elegant and refreshing sparkling wine called Cremant, from the Alsace region. Alsace is one of the eastern borders with Germany, on the west bank of the Rhone River, so it should not be a surprise that its most famous grapes are all white – Riesling, Gewurztraminer and Pinot Gris – much the same grapes that reign in Mosel and other German wine regions. Alsace wines are known to be among the most food-friendly white wines.

There’s only one red grape that has made headway in the Alsace – and that is Pinot Noir. A delicate grape, Pinot Noir flourishes in cooler climates, which is where you find many of the best white grape vineyards. The Rosé version of Cremant from a centuries-old winery like Gustave Lorentz (still owned by the Lorentz family) is 100 percent Pinot Noir and produced in the Methode Champenoise, which is the traditional way Champagne is made. Between it bubbles and its fruit, Cremant Brut Rose turns down the heat of the Cajun spices, while waltzing with the caramel sweetness that suffuses the topping. French wines for French toast…surprising pairings that work with some surprising fare.