Element Restaurant and Lounge's Executive Chef Tudor Seserman continues the tradition of quality cuisine with a pared-down approach that is big on flavor if not frou-frou frills. 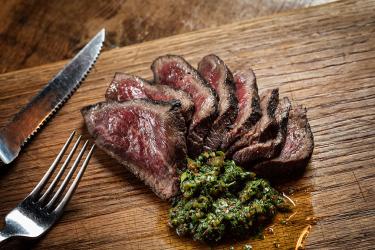 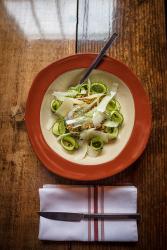 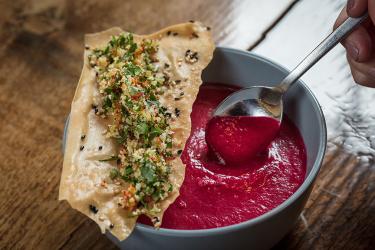 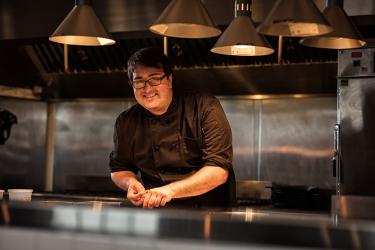 With establishments such as Elaia, Parigi, Tree House and The Copper Pig on his resume, Element Restaurant and Lounge Executive Chef Tudor Seserman has pulled the essence from each of those experiences just as surely as he coaxes flavor from ingredients in his kitchen.

Seserman made the move to Element in September 2016 under lauded Executive Chef Josh Charles, who left for Blood and Sand Restaurant in February. Though the two have similar approaches to food—sourcing locally when possible and coaxing maximum flavor from each ingredient—Seserman’s plate is less about frill than a flavor thrill. The precision he learned from restaurateurs like Ben Poremba (Elaia, Olio, Nixta and Parigi) is on full display throughout Element’s menu of seasonal, contemporary fare.

“I tend toward things that look simple but have a lot of complexity when you really look at it,” Tudor says. He generally limits the number of elements on the plate to three, five at the most. “I approach things a little more soulfully, where I work more on the base of the dish. For me, it’s more about simplicity with less garnish on the plate. I do a few things really, really well.”

Emblematic of his simple-plate-complex-flavors approach is the Buttonwood Farms roast chicken breast, a popular dish among Element’s regular crowd. “It’s cooked in duck fat and other aromatics. Three elements: roast chicken, braised collard greens and savory sage bread pudding. It’s a very simple dish, but there’s a lot of work in each of the elements,“ he explains.

That philosophy means that Element’s reputation for superior cuisine is safe in Seserman’s hands. Sharing small plates? Seserman’s steamed buns with crispy pork belly and spicy-sweet apple kimchi hit all the notes, as does the arancini served with cilantro aioli. For the main course, Seserman recommends the roasted chicken, or the braised lamb shank, which he serves with spaetzle and carrots.

For those who thrive on at least some change, Seserman doesn’t disappoint there, either. Once summer is in swing, look for his menu to usher in more fresh seafood from Louisiana making way for the addition of a grouper dish, shrimp, fish stew, haddock and perhaps alligator, too. It’s sure to be served up with his signature complexity.

Chef Tudor Seserman will offer some of Element restaurant's signature dishes at the Cooking School on Wednesday, June 7, 2017 at AUTCOhome. The cost is $35 per person. For reservations, call 636-230-9640, ext. 27, or email [email protected]. Seating is limited.

Beet and Orange Soup: This cold soup dates back to Seserman’s days at Tree House Restaurant. He roasts the beets to bring out their natural sweetness. Squeezes of orange and lime hum in the background, propping up the other flavors in this fresh and satisfying soup. Wine pairing: Ironstone Merlot

Coulotte with Chimichurri: “Coulotte is a nice cut of beef that’s similar to a hanger steak. It takes a marinade very well,” he says. “It’s part of the top sirloin and has a lot of flavor of its own.” The marinated meat is grilled and served with a bright and herbaceous fresh chimichurri sauce. Wine pairing: Famiglia Bianchi Cabernet Sauvignon