There's Just Something About Hue

Cielo's Executive Chef Gian Nicola Colucci paints a picture on a plate with colorful dishes that dazzle first the eyes, then the palate. 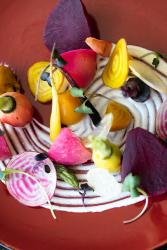 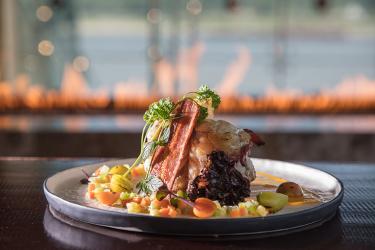 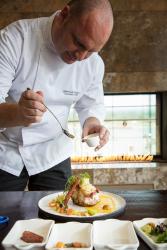 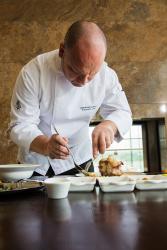 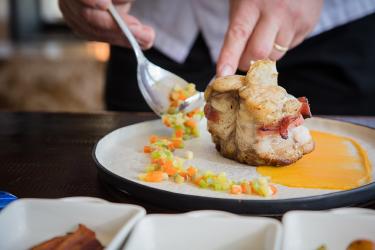 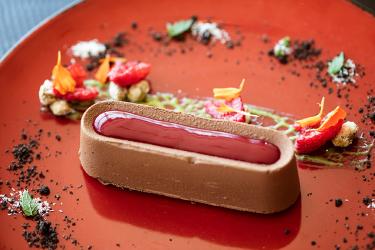 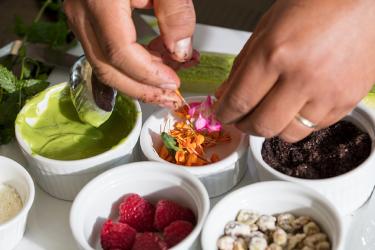 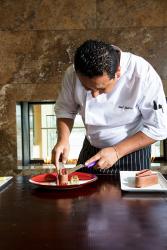 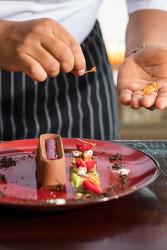 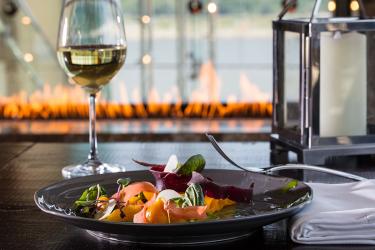 A meal at the Four Seasons Hotel’s rooftop Cielo Restaurant and Bar offers diners a veritable sensory overload—and we’re not just talking about the stunning panoramic views of Downtown and The Gateway Arch. Order from Executive Chef Gian Nicola Colucci’s menu, and you may find yourself as transfixed by what’s on your plate as what twinkles along the skyline.

Colucci, a native of Italy, was reared on farm-to-table foods, dining on scratch-made dishes composed from ingredients that grew just steps from the family kitchen. Early on, he learned the value of fully ripened produce, unprocessed foods and a good measure of visual appeal.

“Color is really important; I believe in color in the plate. I use different produce to bring a lot of colors to the plate,” he says. “Everything has to be fresh and really sparkling on the plate. If it doesn’t look nice, it doesn’t taste nice.”

Even a vegan plate can be deceptively complex. A fall assemblage of root vegetables may require one veggie to be pan-seared and finished in the oven, another to be roasted or grilled, another pureed or artfully cut and served raw, with each approach intended to bring out each product’s most vivid flavor, texture and color.

Chef Colucci’s philosophy of color, freshness and flavor is on full, Technicolor display in the Tonnarelli Neri, a dish from Turin where he was born and inspired by his time working in Venice. The square spaghetti is colored a shocking black from the squid ink that’s so popular in the region and punctuated with red ripe tomatoes and green anchovies. A bright prosecco reduction brings that flavor “sparkle” he requires. “It’s got the red, white and black, and it’s beautiful. People love it.”

Colucci has also brought with him his family tradition of using the best of what’s local and seasonal and growing or making as much as he can on-site. His hands-on approach to every ingredient gives him control over every hue in each dish, every nuanced flavor within it and the presentation that pleases all the senses one by one. Breads, pastries, pastas and prep work are done in-house. Butchering is as well, and Colucci grows his own herbs and microgreens, so they’re always on hand and picked just as they’re needed.

“In this way,” he explains, “it becomes kind of a school for everyone who comes to work here to learn everything from beginning to end.”

Want to try a number of creations from Colucci’s kitchen at once? In addition to food service seven days a week, Cielo hosts Sunday brunch from 10:30 a.m. to 2:30 p.m. Foodies can also attend special events, including cooking classes with Chef Colucci and others, special festivals and holiday dinners. Information about these events are available on Cielo’s website, CieloStLouis.com.

Chef Colucci will demonstrate four sensational dishes highlighting color, freshness and flavor at the October Cooking School on Wednesday, Oct. 4, from 6:30-8:30 p.m. at AUTCOhome. For reservations, call 636-230-9640 ext. 27 or email [email protected]
The Cooking School Menu
Compressed Butternut Squash with Orange Beets, Burrata Cheese and Fresh Parsley Sauce: Chef Colucci cures the squash with salt and herbs, marinates it with oil and garlic, and cooks it sous vide under pressure. It’s served alongside the beets and cheese with parsley sauce. “It’s really romantic, and of course, it has a lot of color.” Wine pairing: Count Karolyi Gruner Veltliner

Seared Monkfish: A robust and muscular fish, monkfish can become chewy when not properly cooked. For this dish, Colucci wraps it in pancetta, sears it, then finishes it the oven. It’s topped with red cabbage and served with sweet potato. Wine pairing: Bodegas Muriel Blanco