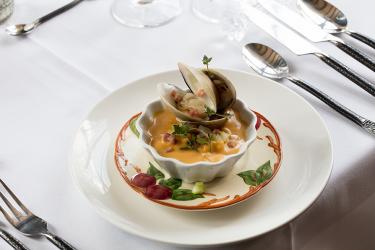 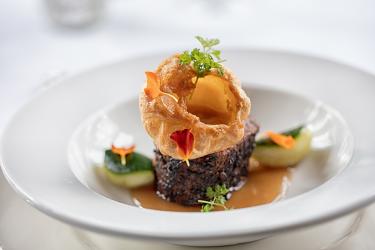 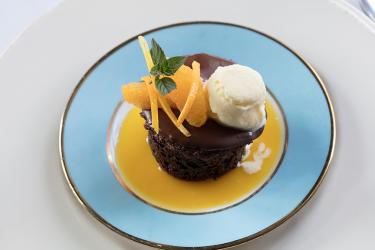 Carl and Nancy McConnell have had a close and enduring professional relationship with Wiese Nursery since opening Stone Soup Cottage in Cottleville nine years ago. They were mere minutes away from the Wiese family farm, making treks for the freshest product an easy bet. One hundred percent of the restaurant’s produce still comes from the farm… only now it comes from the 6.5-acre parcel they purchased from the Wieses, and where they relocated in 2013. Proteins come, whenever possible, from Missouri-based purveyors.

“People have talked about the farm-to-fork movement for a long time, but we actually are right on the farm where we get our produce,” says Chef Carl McConnell, who co-owns Stone Soup Cottage with his wife, Nancy. “That makes us special in St. Louis—and unique in the region—and our clients really do appreciate it.”

Everything about Stone Soup Cottage, in fact, is as close-to-home as one can get. The cozy 40-seat restaurant, built with wood salvaged from an old barn on the property, features comforting fireplaces and warm, inviting décor. Carl still offers his signature prix fixe dinner service three nights a week, with Nancy welcoming guests for the feast.

Lest one get the impression the move was made with expansion in mind, Nancy is quick to set the record straight: “The temptation for a lot of people is to grow bigger or open a second location,” she says. “We made a concerted effort to keep it small and intimate. It’s not just about the food or the atmosphere or ambiance; it has to be all those things. So, for us, it’s no high-volume, no turning tables. We had to make a decision that we would never get larger than 40 people. And [Carl] makes it a point to meet each of the guests and make it an experiential dinner.”

The only “expansions,” per se, the two have made is to the functionality. Carl has a larger kitchen in which to operate. There’s now a smokehouse, and they’ve built an arbor right in the middle of the farm, as well as an infinity patio diners can enjoy on temperate nights.

Even more important, the McConnells have struck a balance between their professional and personal lives. As passionate as the couple is about the food experience they offer their customers, it was important to them to leave time for family. With two teenage boys, Carl and Nancy prefer to remain closed for important days like major holidays, birthdays and days when other family functions are planned.

Stone Soup Cottage’s rarity—both in terms of available seats and its business model—make it a hot ticket for Missouri gourmands who cherish ambiance. Dinners can fill up months in advance, but that doesn’t necessarily mean you have to plan that far ahead. Private events require no facility fee, just adequate notice. “If you can get 12 people together, you can have a dinner here,” Carl says. “Or call and get on the waiting list; we do get cancellations.”

Those eager to try their hands at Stone Soup Cottage fare can get a demo of Chef Carl McConnell’s seasonal offerings at the next cooking school Wednesday, Nov. 8, 2017 at Ferguson Bath, Kitchen and Lighting Gallery. The cost is $35 per person. For reservations, call 636-230-9640, ext. 27, or email [email protected]. Seating is limited. {SOLD OUT}

The Cooking School Menu
Pumpkin Chowder: “I grew up in New England [Boston], so I love New England-style clam chowder, so this is a play on that.” The soup is thick and creamy with flavors of garlic, celery and nutmeg. Chef McConnell tops it with smoked clams and garnishes with pumpkin seeds. Wine pairing: Simonsig Chenin Blanc

Steak Au Poivre: McConnell loves the heartiness of Missouri-raised prime beef for the winter. The meat gets a generous crust of crushed black pepper before searing. Cooking school students will learn the celebrated chef’s red wine demiglace, which is served with the steak along with farm-fresh vegetables and potatoes. Wine pairing: Ironstone Reserve Cabernet Franc