A New Wrinkle in Time 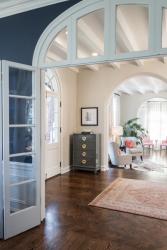 The foyer and sunken living room of the Stoeberls’ open-concept first floor are clearly visible from the formal dining room. 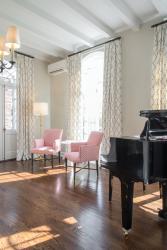 A pair of coral-and-white chairs and streams of natural light brighten the neutral piano room off the main living area. 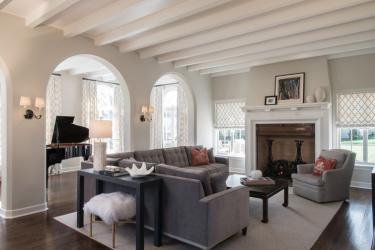 Angie and Dave Stoeberl kept the original ceiling beams, archways and fireplace to retain the historic charm of their 1917 Maritz & Young home. 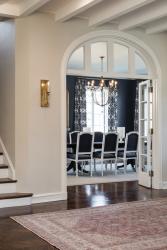 The formal dining room, as seen from the foyer, is painted a deep blue with white trim and graphic window treatments. 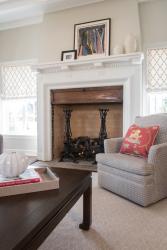 The fireplace is original to the home, built in 1917. The Stoeberls even purchased the original fireplace irons from the previous owner, a 90-year-old surgeon who grew up in the house. 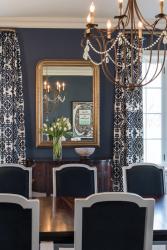 An antique mirror and gold-toned fixtures complement the dark blue and white of the formal dining room. 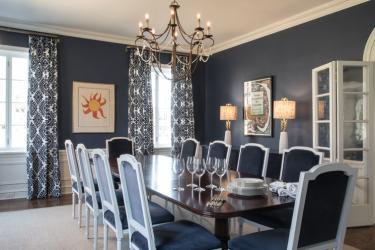 Designers Nancy Spewak and Susie Sheahan of Property Enhancements LLC updated lighting in the dining room (above), kitchen table (below) and kitchen prep area (opposite page) that mimicked the style of the early 1900s when the home was built.  Bottom: The family enjoys most meals at the charming booth in the kitchen. 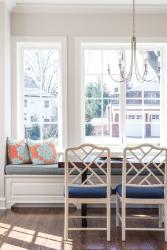 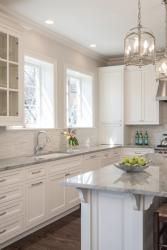 The pearl quartzite countertop was the first design choice in the kitchen, which sports modern white cabinetry and a Wolf cooktop.

Angie and Dave Stoeberl saw a lot more in the dark corners of the big house in University City than most people would. As they plucked through the historic structure with Period Restoration owner Randy Renner Jr., the couple saw a home; one well past its glory days, but a home nonetheless.

The newly polished architectural jewel hearkens back to its 1917 infancy but now radiates modernity. It’s an airy, bright and well-appointed home whose herringbone-floored foyer, high ceilings, drop-down living room and large fireplace draw guests in. Its lush furnishings are neat but not overly precious; the perfect gathering spot for a family that includes two preteen girls.  “A little bit of West County in U City,” Randy calls it. … But it was long road to that point.

The previous owner had grown up in the home, and the residence held special meaning to her. Angie and Dave were honored to purchase the property and restore it to fit their family's lifestyle. Walls of white and hunter green, cream carpeting and a lifetime of family living meant that interior designers Nancy Spewak and Susie Sheahan of Property Enhancements LLC as well as architect Paul Fendler of Fendler + Associates, Inc. had their work cut out for them.  “It was in disrepair, but it had really good architectural bones,” says Nancy.

The Stoeberls, who previously lived in a home built by Maritz & Young, recognized the architecture firm’s signatures in the century-old structure. The prestigious St. Louis company built some 100 houses in the area in the early 1900s. “There’s something about the architecture and style — they had vision,” says Angie. “It’s open, not boxed in. It’s stately, but because of the open spaces, it lends itself to family living. We knew the potential right away.”

With all-new electrical wiring, plumbing, plastering and HVAC a given, there were numerous other nuts and bolts of the preservation that needed sorting out, as well as the interior design. The couple, wishing to respect the history of the home and the work of the original architects, asked Randy to salvage everything possible.

For Period Restoration, that meant cleaning, repairing and restoring every piece of roofing tile, every archway, ceiling beam, plank of wood and pane of glass that could be saved — then milling new pieces for anything that could not. The windows alone took the duration of the nine months’ project to restore, with one dedicated worker painstakingly bringing life back into every frame, bracket, handle and hinge.  “You’re basically breaking down the whole thing and rebuilding it, and you don’t know what you’ll encounter,” Randy says. “You could build a house faster than you can redo one.”

Randy was fortunate to acquire original drawings of the inside and outside of the home, which the crew used to recreate the pergola at the front of the house. After the pergola, coppersmithing and rebuilding the garage, he sees the original character of the home emerging through the decades. “There’s really no house on that street that’s had even close to the level of detail on that home,” he says.

The flooring in the foyer, original to the home, was laid in a herringbone pattern perpendicular to the front door, beckoning those who enter. Nestled down to the left, the sunken living room draws attention further into the ground floor. Its restored beams pull the eye toward the oversized hearth and a trio of archways that provide an open boundary between it and the casual lounging space where the baby grand sits.

Behind the sectional, a pair of chairs and a lamp table near the front window serve as a reading area. The comfy spot sits on a brown-and-white cowhide the girls playfully named Chocolate Chip.

Soft neutrals bump up nicely against white trim throughout the foyer and living room, while pops of coral in upholstered chairs and throw pillows warm up the space. That cozy neutral is continued in the kitchen, where copious amounts of natural light, a sparkling Wolf cooktop and a sea pearl quartzite countertop nearly steal the show. “That material really drove the design,” says Nancy. “Both Angie and Dave have an innate sense of style and were able to communicate that to us here and in the living room. We loved that they had a vision for the house.”

Like a lot of families, the Stoeberls saved the drama for the dinner table. That is, the formal dining room, where a deep blue replaces the original green on the walls and is matched in the upholstered chairs. Complementary gold accents include the sleek chandelier that hangs over the dining table and the antique framed mirror overlooking it all.

Nancy and Susie found countless other subtle touches that lend an air of authenticity to the entire floor, from elegant gold-toned wallpaper in the first-floor bathroom to the filleted sconces there and at the dining room entry. And one more acquisition — this one Angie’s — has special meaning: the fireplace irons that once stoked countless fires in a multigeneration household. “The owner was going to sell them at auction! I said, ‘No, I want them.’ So I bought them,” Angie says. It’s a fitting find for a couple who bought a lived-in, loved abode with their family unit in mind. “The things that make me happiest are things that include my family — the sofa where we hang out, the banquette where we eat dinner every night. It all came together.”

Perhaps when a home comes together, so does the family. There is certainly nothing stopping togetherness in the Stoeberls’ new old house.