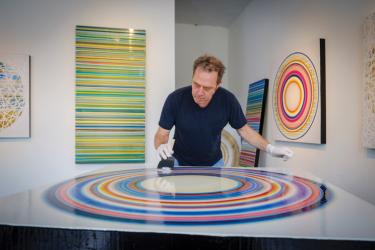 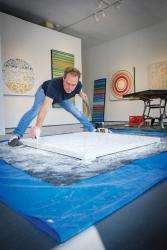 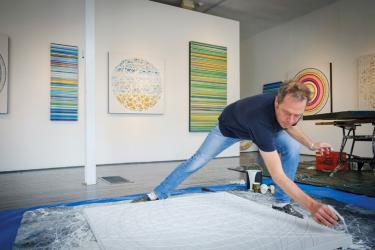 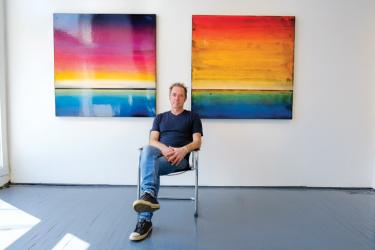 “My love for art and geometrical figures probably started on the island,” reminisces Michael Hoffman, a painter based out of St. Louis. “When I was a teenager, I lived on an island by Seattle called Whidbey.” While living on the island, he helped his father and brother build a geodesic dome, or a hemispherical structure made completely out of triangular elements. Surrounded by the beautiful Washington scenery and using architectural art to get closer to family started his basis in creative work, but he had a long way to go before he started painting.

“When I was young, I always wanted to get into painting, but it took me a while to get around to it,” he says. He attended The Evergreen State College in Washington for photography, which he believes helped him develop his visual compositions. Additionally, he thinks that not having a formal painting education allowed him to experiment with different materials and methods.

Though photography school did help him with some aspects of his future career, he thinks the most formative part of his life that led to his success was his time spent in the circus. The circus he joined traveled across Europe, and he found his inspiration for many of his pieces in the fabulous architecture and artwork in places like Spain and France. “Many of my pieces are actually titled after different places I saw in Spain. As for France, I was always so captivated by the mix of ancient and modern that you can find there.” He also draws inspiration for his work from the expressionist movement, mid-century modern furniture and experiences with family and friends.

Hoffman works with oil paint in three different ways: target pieces, stripe pieces and poured web art. His target pieces were inspired by his early childhood in New York City. He lived next to Charles Mingus Jr., the son of the famous American jazz musician, Charles Mingus. Hoffman recounts his visits with him, watching him paint using turntables. Wanting to create something similar, yet unique, Hoffman constructed a turntable-like contraption made out of an old bicycle wheel.

“When you look at my work, I’d like it to be compared to a leaf in the fall, especially the web pours. They look perfectly geometrical from a distance, but once you get closer, it’s much more organic.” He does all of his web-poured pieces by hand, and every one of his compositions is done on hand-built panels, some covered with canvas. Each piece uses a blend of different types and thicknesses of oil paint — some opaque, others translucent — to ensure that no piece turns out the same and that no piece looks rigid.

“I’ll go into a painting with an idea in mind of how it’ll turn out, but it always changes,” he laughs. “Sometimes I make a mistake, but it always turns out fine. Mistakes change the way the entire painting looks, and it’s always for the better.”

If you’re interested in buying Michael Hoffman’s work, you can find it in his gallery in Maplewood as well as in other local and national galleries. He's running a new exhibit starting June 14. You can also visit him at www.hoffmanpaintings.com.