Ben Lowder takes natural geometry and recycled materials and turns it into art. 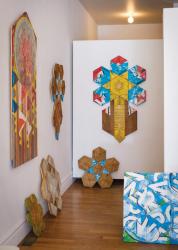 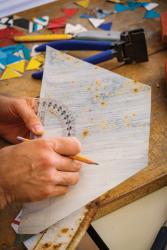 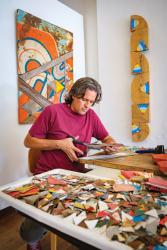 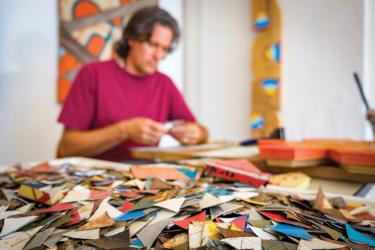 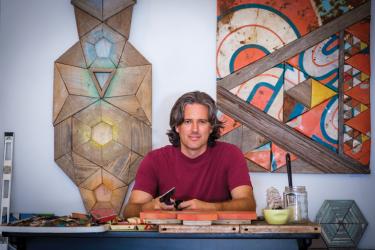 Ben Lowder is and has always known that he is an artist. Today, it's obvious. He creates bright and bold reconstructions of recycled wood, discarded vintage advertising to create statements on our modern society. His clout spans from coast to coast, and he even has a piece hanging in Will Smith's production company, Westbrook, Inc.

However, way before that, Lowder was just a midwestern child with a lot of creativity. He would find little ways to garner praise for his early creative ingenuity. He recalls one of his earliest memories from when he was a toddler, “I remember taking a bunch of change that was on our coffee table and making a mosaic pattern. Then someone came over and said something to the extent of, 'Wow, that's really beautiful! Who made that,' and it was me, so I was very proud. A lot of my formative memories are like that. That creativity has become an integral part of my own personal mythology.”

Lowder grew up and applied that creativity to his studies of signs and symbols and commercial advertising at Southern Illinois University in Carbondale. It's here that he encountered the legacy of another huge influencer, Buckminster Fuller, the creator of the geodesic dome. From there, he became a graphic designer, a career he would continue on with for the next 15 years.

Really it wasn't until he decided to fulfill a three-generation family tradition of building his own home that everything came together for him as an artist. Lowder explains, “When I got married and started having kids, we built a home. I get migraines, so I wanted to create a place that was a headache-free zone. To accomplish this, I used a series of design principals that were pre-industrial revolution, before the advent of air conditioning and heating, that essentially uses sacred geometry to align with nature instead of implementing technology to counteract the elements.”

It's this experience and method of its construction combined with his expertise and waning passion for advertising that collided into what would become his new career as an artist and his signature style. As he puts it, “I took my college education on semiotics and my experience in commercial art and design, and I distilled these values into art objects that were coded with all this information: the sacred geometry, the sustainability of reclaimed materials and the deconstruction of advertising.”

The process of creating one of these pieces is as unique as the ideas that they are comprised of. Lowder continues, “It's three-fold, which is funny because a lot of it is triangular. It starts out with a kind of treasure hunt. I'm searching for the heritage materials of our culture that are sprinkled around the heartland: rusty, metal signs and reclaimed barn wood. Then there's a sort of ritual I do to cleanse it. I use white sage, which releases it from its former usage. It makes it neutral so that I can reconstruct it into something that aligns with my core values or idea for the project.”

Looking forward, Lowder still plans on going from coast to coast to share his work, but his home base will be right here in St. Louis. Not only are his roots here, but he also believes in the importance of the Midwest and this city’s influence. As he puts it, “I wanted to plant a flag in St. Louis. I think this city will factor in as one of the most important cities in America moving forward. This 20th century way of life is in need of evolving and progressing, and I think St. Louis is where that's happening.”

Lowder has a gallery show on October 26th at the Open Mind Art Space in Los Angeles, CA. To keep up with everything that Ben Lowder has coming up, visit his website at BenjaminLowder.com and on his social channels.