Photography by Square One Media Productions 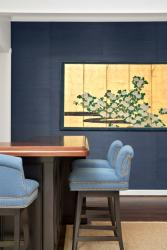 The homeowner already owned the framed artwork; Fratt & Bush selected a Serena & Lily grasscloth wallcovering in navy blue to allow the art to pop on the wall. New barstools are covered in a heavy-duty jacquard and accented with nailhead trim. 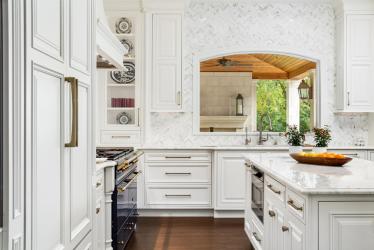 The Lacanche stove in French blue, the homeowner’s admiration of white kitchens and her desire to highlight her blue and white Asian pieces drove the redesign of the kitchen. The designers reconfigured the space with two islands, repositioning the original island to run parallel to the stove and a second, taller entertaining island. Calacatta Oro marble tile laid in a chevron pattern forms the backsplash. Oak flooring was refinished in a darker shade. 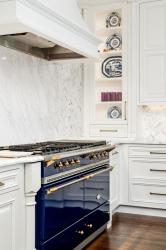 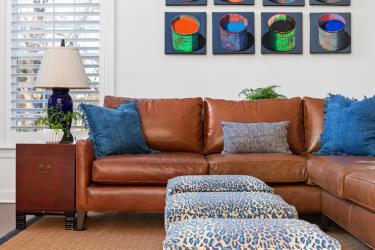 The paintings are a series of acrylic and natural pigments on metal by French artist Stéphane Braud. Playful animal-print ottomans pair with a new leather sectional. 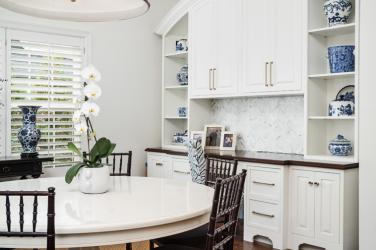 To lighten the hearth room, Fratt and Bush painted an existing cherry table a high-gloss white and paired it with chairs in a blue and white Talavera fabric from Brunschwig & Fils. The blue and white chinoiserie pieces take center stage in an arched bookcase that mimics a picture window in the nearby kitchen. A Ralph Lauren light is trimmed in leather to coordinate with the new leather sectional. 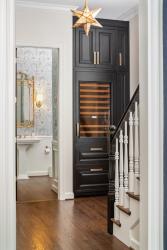 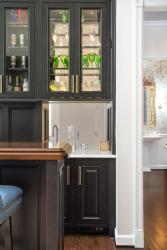 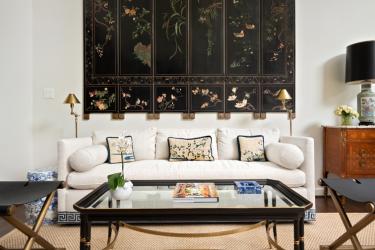 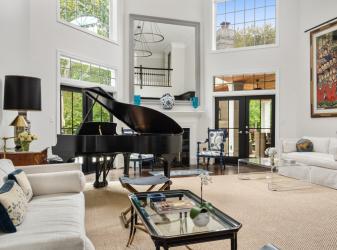 Chic yet relaxed with an element of fun, the living room’s makeover included new custom sofas covered in a creamy white Highland House fabric. The mirror over the fireplace had originally extended the mantel to the ceiling. Ceiling fans were also removed and replaced with statement brass lights. The Chinese folding screen, hung above the sofa, is from the homeowner’s collection. 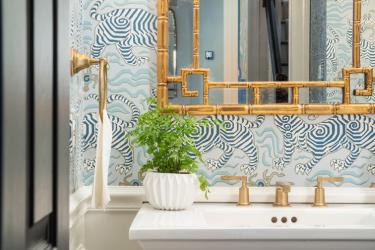 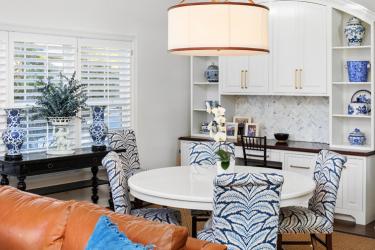 The owners of this Town and Country home love entertaining and family parties. After living in the home for many years, the couple built a beautiful outdoor entertaining space in a European style that feels relaxed yet elegant. The overwhelming success of the outdoor space called for renovation phase two—transforming the home’s public areas into a similarly sophisticated, gracious entertaining space. For the indoor renovations, the owners turned to a longtime acquaintance, Lindsay Bush, and her business partner Dede Fratt of Fratt & Bush Home.

The owners call the outdoor living area Piazza Katarina—so named for their love of Italy and the Italian sensibility of gracious outdoor living. With its limestone pillars, wood ceiling and outdoor fireplace, “it’s very sophisticated, the kind of place you want to linger with your coffee, and you could easily see somewhere in Italy,” says Fratt. “Katarina” is a play on the homeowner’s name. Fratt says she and Bush were asked to bring the same sophistication and Euro-inspired sensibilities into the home’s interiors, while incorporating the homeowner’s extensive collection of chinoiserie. “We have multiple Asian influences in our home as I traveled extensively in Asia early in my career and we love combining styles,” says the wife.

Design work began in the kitchen. The homeowner fell in love with a Lacanche range in French blue.  “It’s a major cooking stove,” Fratt says of the centuries-old French brand. The wife is already a good cook, Fratt says, but the homeowner wanted to improve her skills even more. At the same time, the homeowner had always wanted an all-white kitchen to highlight her blue and white china. Collaborating with Mike Beck of Beck/Allen Cabinetry, the homeowners reconfigured the kitchen, eliminating all existing cabinetry and the original island. The designers removed a mullion window and fitted a larger picture window shaped to mimic a design element in the piazza. They installed a large, marble-topped island, running it parallel to the stove. Upon entering the room, the eye is drawn immediately along the island to the window, which frames the view of the piazza. A second, "entertaining" island at pub-table height was added; it acts as a buffer between the kitchen and the adjoining hearth room.

In its original iteration, the designers felt the hearth room “had a lot of darkness,” Fratt says. To lighten the room, an existing round cherry table was painted a high-gloss white. Terracotta chairs were recovered in a blue and white Talavera fabric from Brunschwig & Fils. A Ralph Lauren light is trimmed in leather to coordinate with a new leather sectional. An archway on the built-in bookcase mimics the shape of the new kitchen window. The fireplace, originally a red brick, was clad in limestone to meld with the limestone used in the piazza just steps away. Such customization “adds interest and gives it personal detail,” Fratt says. “Everything about the room feels different.”

In the living room, the owners wanted a gracious entertaining space where guests would feel equally at home wearing jeans or decked out in their holiday finery. Fratt and Bush delivered, utilizing the blue and white color scheme with pops of black and navy. The room is large, with 25-foot ceilings, plenty of space for a baby grand piano and several areas Fratt calls “pods.”  She says she likes to create intimate pockets for conversation within larger rooms. One such grouping features two chairs from the homeowners’ collection which were painted navy, recovered in Schumacher Nurata Embroidery fabric in “Lapis” and placed in front of the fireplace.

Some of the homeowner’s Asian art was inherited from her mother and grandparents, while other pieces were purchased on business trips. Above a Highland House custom sofa in creamy white, the designers hung a Chinese folding screen from the homeowner’s collection. “Hanging it gives the piece great presence rather than using it as a room divider,” Fratt explains. “It is a beautiful piece of art, but we used it AS a piece of art.”

On the opposite wall, the designers placed a beloved painting the homeowner affectionally calls “The Ancestors” above a smaller sofa. “It’s a Chinese dynasty, a beautiful piece which is quite large—probably six feet wide and eight or nine feet tall,” says Fratt. “The homeowner has a very sophisticated sense of style.”

The homeowner’s love of blue and white is fully displayed in the powder room. The designers turned the room into a showstopper by selecting Clarence House “Tibetan Dragon” wallpaper to top new white wainscoting. A new pedestal sink features rubbed brass fixtures from Immerse. Fratt found a bamboo mirror at a consignment shop. Painting the powder room door black allows new crystal and brass doorknobs to pop. Fratt added the Monrovian star light in the hallway outside the powder room. “Teeny tweaks like these just change everything,” Fratt says of custom touches.

With phase two complete, the homeowner praises Fratt and Bush for their work. “I engaged smart, savvy women to bring ideas, textures, fabrics and light fixtures together in a way that is sophisticated and welcoming,” she says. She advises other homeowners embarking on major remodels to “always engage witty, brilliant women to make you laugh and bring fun to your project.”

Fratt agrees the project was a joy. “They were just so welcoming of our ideas and really wanted to put the vision in place,” Fratt says of the homeowners. “They were happy to think out of their own box on some of our ideas. The four of us—Lindsay and I and the homeowners —really had a good time on this project.”

The fun continues in phase three as Bush and Fratt tackle renovations of the master bedroom and bathroom. “We’ll be making it more spa-like, a lovely getaway from everyday living,” says Fratt. “Lindsay and I really love what we do, which is helping people love their homes even more.”