Using the color palette of Nebraska’s rural landscape, each room in this spectacular Omaha penthouse is inspired by a different season. 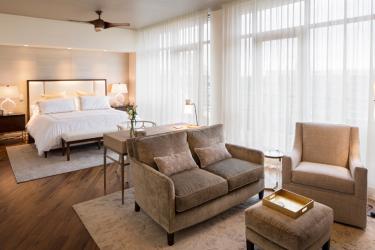 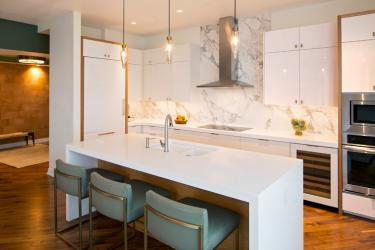 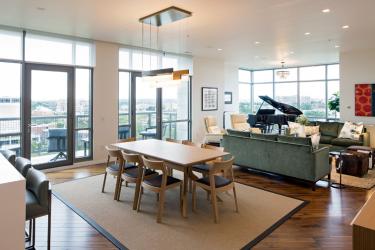 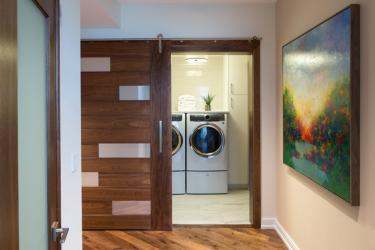 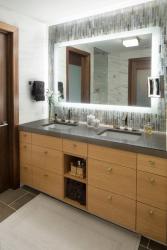 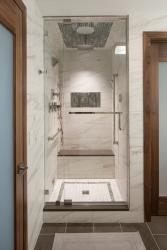 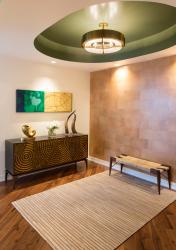 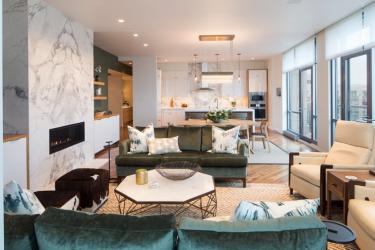 The vibrant cultural scene known as Midtown Crossing in Omaha, NE, is what initially drove these homeowners—new retirees—to want to live in this area. They wanted a home that would allow them to age in place and enjoy city life within walking distance to the gym, grocery stores, movie theaters and restaurants, as well as proximity to the symphony, museums and other fine arts venues. Leaving their traditional Midwestern lifestyle behind, their new penthouse centers between two lively downtown areas—the historic Old Market and Creighton University to the east, and to the west, the foodie and architectural haven of the Blackstone District. The Midtown Crossing development by Mutual of Omaha comprises four mixed-use buildings and a hotel surrounding beautiful green space with an outdoor stage called Turner Park. In pre-COVID times, the park hosts Omaha’s summer Jazz on the Green outdoor concert series, movie nights, and the Midtown outdoor market among its many events. The surrounding neighborhood is a combination of lovely historic homes, upscale restaurants, shops and the energetic pulse of downtown city life.

“My initial design concept was inspired by the Great Plains landscape of central Nebraska, which was home to the owners’ previous residence,” says St. Louis interior designer Sara Weller, founder of Sara Weller Design, who was commissioned by her clients to plan their new downtown Omaha dwelling. “The color palette and materials were selected to give them the comfortable contemporary vibe they desired with references to what they loved about the nature of the lake home they were leaving behind. From the beginning of the process, I called it prairie chic,” she laughs.

Using the natural color palette of the Nebraska landscape, each space is inspired by a different season. Sara wanted the outdoor light and color to work in harmony with the interiors and highlight the expansive penthouse views of the downtown skyline and the Missouri River beyond. She also wanted to create a more contemporary style without the starkness often associated with it.

“Their previous home was very Midwestern and traditional,” says Sara. “The couple wanted to leave that behind but still feel comfortable and able to entertain their children and grandchildren. I felt the way to best achieve an inviting feeling would be to reference a few distinctive styles harmoniously, so there is a natural blend to the pieces in the home,” she notes.

Considerations were made for several client requests including the incorporation of green hues into the design as a favorite color and solutions for ease and convenience in the kitchen with pull-out access taking the place of traditional shelving storage. The homeowners are also music lovers and sought a design solution that could allow for sound everywhere. This led to one of the most exciting features of the home—a fully integrated lighting, sound, motorized shading and climate-control system. Executed by Echo Systems Midwest, the seamless technology includes concealed invisible speakers on either side of the dining chandelier and a sound bar that blends into the wallcovering in the living room. The master bath features a mirror television and the master sitting area has an art lift concealing the television—also known by the homeowners’ grandchildren as “the magic TV.”

“When people think of Nebraska, they typically default to cows and corn,” jokes Sara. “Given the prairie chic inspiration, I sought ways to give a nod to the association but up-style leather and hides in interesting ways. A leather tile wall greets you in the foyer, while a cowhide rug highlights the Steinway,” she adds.

To celebrate the natural beauty of the prairie and its native plants, three botanical pieces were commissioned by local St. Louis artist Alicia La Chance that were inspired by the trees of the owners’ previous home. A fourth piece commissioned by Julie Malone, also of St. Louis, anchors the hallway and signals the transition to the master bedroom.

“One of my favorite memories was flying up for the day to see the unit for the initial consultation,” Sara recalls. “It was just a bare concrete floor and a few walls and plumbing rough-ins. I envisioned the homeowners entertaining their friends and family in the open kitchen living area during the summer concerts and enjoying hearing their musician son play the piano during the holidays,” she adds. “Working from a blank slate was such a thrilling opportunity, and I had clients who were excited to explore possibilities—it was a truly creative collaborative experience.”