2014 Garden of the Year: Growing Garden 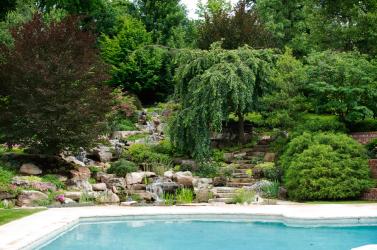 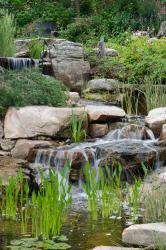 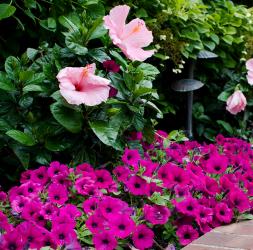 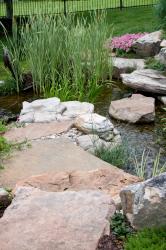 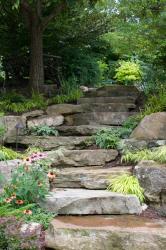 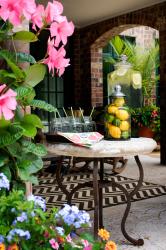 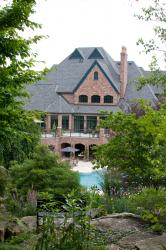 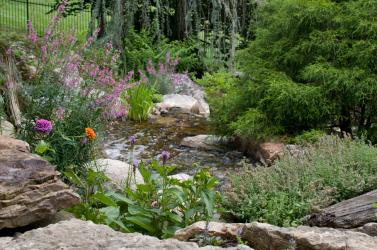 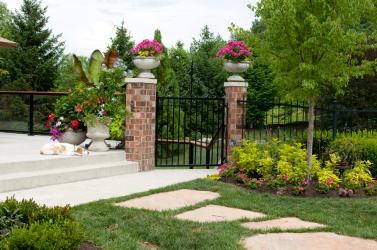 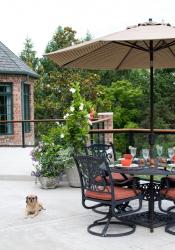 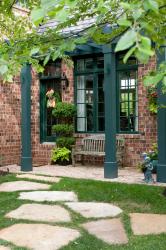 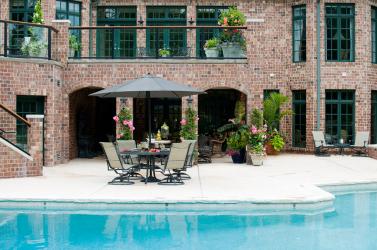 Often small things can spark major transformations. It was a series of what were thought to be small concerns and simple ideas that lead to the creation of one of the most spectacular gardens in the St. Louis area; one that was a highlight of the recent Missouri Botanical Garden Garden Tour and is the St. Louis Homes & Lifestyles’ Garden of the Year.

For Debbie Wilhelm it began with a name in a magazine ad and a call to Chris Siewing, who owns Nature’s Re-Creations, a pond and waterfall installation company. Debbie and her husband Mark, who live in west St. Louis County, already had a pond and a waterfall located near their large swimming pool. They were looking for someone to do a fall clean up. As Chris worked, Debbie and Mark began talking about some issues they were having with their current installation, including what they felt was a probable leak. They asked Chris to take a look.

The investigation uncovered bad news. There was not only a leak but multiple problems with the system, which had been in place since 2001 and had already had one major overhaul. On the plus side, Chris was filled with numerous ideas as to how a third transformation of the 25-foot backyard slope (created from the earth dug out for the swimming pool and lower-level patio) could integrate a new pond and waterfall into the entire outdoor experience for this water-loving family. As he was thinking about the new design, Sophie, the Wilhelms’ yellow Labrador retriever, made a major suggestion.

“The swimming pool cover was already on,” Chris recalls. “Sophie waded into the water that had collected on top of the pool cover and sat down in chest-deep water. I knew right then that any pond had to have stone steps down into the water so Sophie could wade in.” He also knew that he wanted, not only the dogs, but the Wilhelms and their family and friends to have multiple ways they could explore and interact with the new design of the pond and waterfall.

Acting partially on Sophie’s suggestion, Chris’ design brought the pond, which previously had been partly up the hillside, down to the same level as the pool, so viewing the water lilies, aquatic plants and fish became part of the poolside experience. A 150-foot meandering stream now feeds into the pond. It begins in a woodland setting at the top of the hill and makes its way over twists and rills to the still water at the bottom before disappearing into what appears to be an underground spring. On the way down, large cantilevered stones hang over the stream and invite both adults and children to sit a minute and dangle their feet in the cool, rushing water. At the shady top of the stream, oakleaf hydrangeas, hostas, pulmonaria and bleeding heart fill the hillside and give way to white phlox, purple coneflowers, bright-violet poppy mallow, Virginia sweetspire and colorful annuals as the stream flows into the sunlight. Along the way, weathered tree stumps and fallen logs provide bank-side interest and soften the hard edges of the stone.

Throughout the design process, Chris, Debbie and Mark were conscious of the need to view the transformed water feature from every area of the house. “Before, if you were sitting by the pool, you couldn’t see the pond,” Debbie notes.  “I also wanted everything to be visible from the upper patio (off the main level of the house) because we spend a lot of time up there.”

The secret to the new system, Chris notes, is a 10'x10'x10', 3,000-gallon underground storage tank at the base of the stream that supplies the volume of water necessary to support the water in motion. The water coursing down the stream flows into the reservoir and then can be pumped back up to the top of the hill.

Chris also disclosed some other landscaping tricks that give this water feature such a natural look. Cantilevered stones with water flowing beneath not only provide a place to sit by the stream, but also help create a natural look at the bend of the stream, he believes.

To augment the existing limestone that was part of the previous system, he brought in 165 tons of sandstone and used large flat pieces to create two different places for both people and dogs to step across the stream. For people, sandstone steps make it easy to walk up and down the hillside.  For Sophie, there are also flat sandstone steps into the pond itself. “The sandstone is larger and it absorbs water so it doesn’t get slick,” he explains. Also important is displaying the stone in the same way it is displayed in nature. “You should be able to see how it weathered in the woods,” Chris adds.

Creating pockets for plants over and alongside the stream and using weathered wood throughout the water feature help soften the stone and tie the stone to the land, he suggests. Multiple filters keep the flowing water clean and clear.

“Creativity is never a problem when I am designing,” Chris says, laughing. “I always can see things to the nth degree and usually need my clients to rein me in. The hard part is trying to describe everything to my clients so they can see what is in my head.”

In Debbie Wilhelm, Chris found the perfect partner for his ideas. “I love to garden and I’m a water person,” Debbie says with a smile, noting that her gardening taste and plant selection run in the direction of bright colors and tropical looks.  “I never would be one to have a white garden or monotone plantings.”

Aided by Page Berry of Page One Designs, multiple eye-popping containers filled with glowing petunias, vinca, lantana, plumbago, sweet-potato vine and topped with hot-pink mandevilla vine decorate the upper terrace and poolside setting. Debbie’s penchant for color extends to a shade garden at the side of the house, anchored by chartreuse hostas, and to an herb and bird-bath garden near the kitchen door, spotted with bright annuals. For Debbie, the garden is “what I’ve always wanted” and the perfect place to share with friends and family.